Hold onto your knickers, Grandma: Lots of girls kiss other girls these days. And I’m not talking air kisses. And I mean straight girls. I mean very straight girls, such as pledged virgins who are looking to explore the boundaries of their sexuality without crossing over that thin pink line.

Cue old people style reminiscence: I remember when I first heard about the straight girl-on-girl phenomenon. I was at a writers’ colony, working on my novel Younger,

and left for the day to visit my twentysomething nieces Kimberly and Katie. Over dinner, I grilled them about what life was like for young women these days, and they told me about date rape drugs, and digital romance, and dressing professionally in the age of Paris Hilton.

And then one of them said, very casually, “Oh, and of course there’s the thing about girls making out with other girls.” That’s the point at which I spilled my Cosmo and my eyes popped out of my head and landed on the table. Yes, K & K informed me. It had become fairly standard for girlfriends to suck face (they didn’t use that term; I heard it in On Golden Pond) as part of the evening’s entertainment, to amuse onlooking guys as well as themselves.

Well, blow me down. When I went back to the writers’ colony and told this tale, the other middle-aged poetry scribblers were as shocked as I was. But a young woman who taught at a Southern college knew all about the new faux lesbians. “All my female students do it,” she said. “It’s especially popular among the pledged virgins.”

I wrote it into the book, and I’ve been on the lookout for casual girl-on-girl action ever since, though it still doesn’t seem to have hit my suburban New Jersey neighborhood. But if you’re in a bar in the city and you see two girls kissing passionately, don’t be shocked or assume they’re lesbians. And next time you’re feeling affectionate toward another mom in your book group or your BFF, you might consider forgoing the peck on the cheek and slipping her a little tongue. 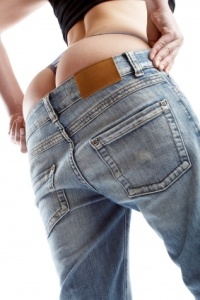 All right, you know you’re not supposed to wear granny panties. But what’s wrong with bikinis? Why does acting young have to mean wearing a thong?

But listen, that’s the next step: Going commando, ala Britney. So think of thong-wearing as a compromise in sexiness.

#31: Don’t Lust After The Lifeguard

When you were 13, you had the hugest crush on the lifeguard, who totally ignored you. Then, when you were 19 or 23, the lifeguard may have lusted after you, but you decided he or she was too immature to warrant your attention. When you were 35, you were too busy making sure the kids didn’t drown to notice.

It’s only now that you’re able to fully appreciate the lifeguard’s virtues, and to fantasize that maybe he or she appreciates yours in return. This is the point at which you have to imagine me slapping you across the face and crying, “Snap out of it!” And that directive isn’t even allowing for the possibility that the lifeguard is a minor.

Unless we’re talking about the world’s Oldest Living Lifeguard — you know, the guy whose skin is so weathered you could make a purse out of it — the lifeguard is too young for you.

Dear Bruce: I’m so sorry. It kills me to do this. But I love you, and I know you’d want me to tell the truth as I see it deep in my heart. So as wonderful as you are, as much as I admire you, as much as I still love to dance and drive to your songs, I’m afraid that makes me old.

It seems like just yesterday — though it was 1975 — that I first saw you onstage in Milwaukee singing Born To Run. You were so sexy, I went out with a guy in my writing class solely because he looked like you. Much more recently, I saw you shopping for earrings in Barney’s with Patty, who was much more gorgeous in real life than in pictures. I thought you still looked pretty hot. Though a lot less hot than you looked in 1975.

Don’t worry, Bruce, I’ll keep in touch. I’ll still (secretly) buy your albums, or download your songs, or whatever it’s called these days. I’ll still dance (alone) to Born To Run. But in public, I’m going to have to act like I don’t know you, okay?

Dancing to a sexy song, especially an old sexy song, is probably all right as long as there aren’t any other people around, particularly any young people. But if young people are watching, attempting to get thoroughly enough lost in moving to the music to enjoy it, much less be any good at it, will be impossible. All that snickering will make you too self-conscious.

Plus, you know, sexy dancing is different these days. People put their arms over their heads and thrust their hips toward the rear ends of their partners as if they’re doing it doggy style, and really, I don’t want to see you doing that.