#82: Stop All That Moving Around 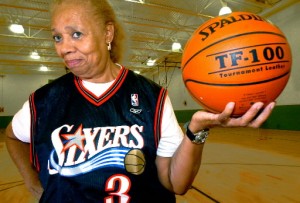 Fifties basketball star Dr. Sylvia Colston-Stills, 71, still shoots hoops every day. Though she may hang up her hightops after reading this.

Here’s a counterintuitive directive: If you want not to act old, you’ve got to knock off all that surfing, skating, basketball-playing and cardio-kickboxing you’ve evidently been doing. Lying on the couch, staying out of the gym, and sitting on the sidelines are the sports of the young, while middle-aged and older people are the ones who are joining ice hockey teams and wearing themselves out on elliptical trainers.

So says a new British study, which found that more and more middle-aged and older people are exercising and playing sports, while fewer young people are exercising than ten years ago. My scientific analysis: We’ve been doing all that kayaking and cycling in a misguided attempt to be thinner and more limber — aka, younger — and to stave off dying. The evil young, meanwhile, say, Ha! We’re thin and limber without even trying. And we know we’re never gonna die.